HOME PAGE
News
The Biggest Foreign Investment of 2018 by OYAK

The Biggest Foreign Investment of 2018 by OYAK 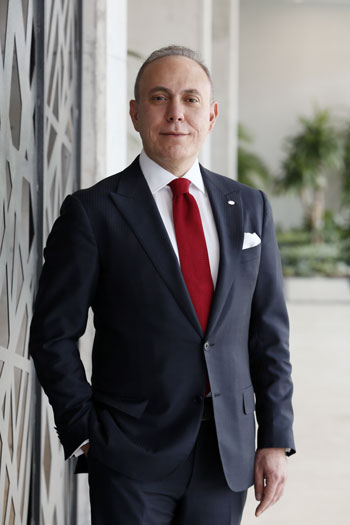 In line with its vision for provide sustainable and high interest to members, OYAK has taken a historical step in the Turkish cement industry and started a partnership with Taiwan Cement Company, one of the biggest cement producers of the Far Easy.

OYAK General Manager Süleyman Savaş Erdem said: “As an indication of the trust to our country’s economy in the foreign markets, we expect the cooperation established between OYAK and TCC will contribute positively to the investments in cement and in other lines of business in accordance with our growth targets in the international area, as well as the country’s interests in the coming period. OYAK will continue with its initiatives in line with its target to become a global brand. We have trust in the future of our country and in our economy, we continue with our investments without slowing down."

Taiwan Cement Corporation (TCC), one of the biggest cement producers of the Far East, and OYAK have started a partnership to join their forces in the international cement market. As a result of this partnership, TCC has acquired 40% shares of OYAK Çimento A.Ş., which OYAK owned 100% shares with a total value of US$ 1,6 billion, for US$ 640 million. With this cooperation, OYAK and TCC aim expanding to the new markets in the region and in the world.

In his statement, TCC Board Chairman Nelson Chang stated that the market in China is almost at its saturation point and does not meet their strategic expectations, therefore they decided to have an international expansion and that they consider cooperating with strong OYAK organization in Turkey with such a strategic importance as a very big opportunity. Chang indicated that this cooperation will be a pioneering step for TCC to expand outside the Asian market, and highlighted that they consider the advantages of OYAK as very important for entering into the global market.

TCC was founded in 1946 in Taipei, Taiwan, and has been privatized in 1954. The company has investments in energy and chemicals, as well as in tourism and health industry. The company has 11 million tons of cement production capacity in Taiwan and 65 million tons in China, and had a revenue of US$ 3,2 billion in 2017. TCC has 23 factories in total and is among the biggest producers of China.