6 Billion TL Interest by OYAK to Its Members

58th Ordinary General Assembly Meeting of OYAK, Turkey's biggest professional pension fund, has been held on May 5 at Ankara. During the meeting, the interest rate for the year 2017 is announced as 24,7 percent, and the total amount to be distributed (interest) is announced as 6 billion TL. Total net assets for the members of OYAK has increased to 29,8 billion TL, while the total consolidated net asset has increased to 73,9 billion TL.

OYAK's 58th Ordinary General Assembly Meeting has been held with the attendance of Major General (R) Mehmet Taş, the Board Chairman of OYAK, Süleyman Savaş Erdem, the General Manager of OYAK, representatives from the business world and the general assembly members. Major General (R) Mehmet TAŞ, the Board Chairman of OYAK, stated that they are aiming to secure the future of OYAK members and to contribute to the Turkish economy while doing this. Taş said, "We are acting by taking not only today, but also the rights and interests of our members in the future into account," and stated that they are putting in their best to increase the savings of OYAK members. Taş said, "We are getting in return of the all the works we have carried out step by step and with patience for the development of our 330 thousand members, and the welfare of our country," and continued:

"Setting a unique and successful example of the professional pension model based on compulsory serving in Turkey, OYAK plays an essential role in the development of Turkey with the added value and employment it creates for the last 57 years. We have started our journey 57 years ago with 65 thousand permanent members, and we now continue with 330 thousand members through the reinforced corporate management structure and consolidated financial power of OYAK. During this process which accounts for more than half a century, we have added new factories all around the country, but it is not these factories that actually gives strengths to us. We take our strength from our shoulder to shoulder solidarity, our love for motherland, and the faith and trust we have in these lands. With this strength, we are proud for contributing to the national employment mobilization, and covering 2,8% of Turkey's total export and 1,34% of the total taxes paid.We will look after the securities of our members and the national capital as long as we sustain. I would like to express my gratitude to all our members who have trust in us; courtesy of our members will always be the anchor point for us. I would like to greet our untiring executives, employees and our valuable business partners, and I would like to thank each of them for their efforts." 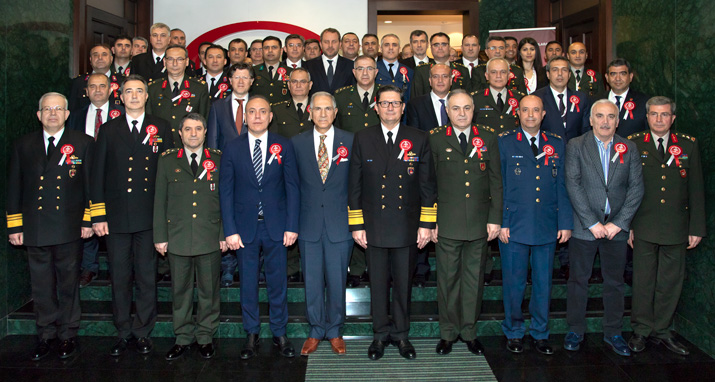 WE ARE ACTING WITH THE VISION OF BEING A GLOBAL ACTOR

During his speech at the General Assembly Meeting, Süleyman Savaş Erdem, the General Manager of OYAK, stated that they have launched practices that will increase the effectiveness, efficiency and profitability of both OYAK and the group companies since they were appointed. Erdem said, "It is not possible to shape the future with the paradigms of past," and underlined that they are acting with the vision of being a global actor. Erdem continued: "We are aware that one should be fast, agile and flexible in order to keep pace with the change. While doing this, we attach utmost importance to build the processes accurately. To that end, we have established the required infrastructure all across the group, and redesigned our organization structure according to the current conditions by prioritizing the operational profitability and saving. We are making significant investments to human, in other words to the intellectual capital, which we consider as the most important production factor. We are witnessing the results of our human resources policy based on loyalty and teamwork, which has a significant part in our success. As it has been to date, we will continue to do the best for our country and our members, duly fulfill this duty which we are proud of, work night and day to bring OYAK to a better position, and have faith in ourselves, our members, and our country."

Also citing the financial results of OYAK for the year 2017, Erdem said:

AMOUNT TO BE DISTRIBUTED IS 6 BILLION TL: "We have taken appropriate positions financially by correctly managing our assets consisted of member savings. With a distributable amount of 6 billion TL, we have reached to 24,7% interest rate this year. With this result, we have increased our total consolidated assets to 73,9 billion TL, and the organizations consolidated net asset, in other words the member reserves, to 29,8 billion TL. We have increased our independently audited consolidated operating profit from 4,7 billion TL to 8,8 billion TL as a result of the activities for increasing operational profitability and efficiency, cost oriented efforts, and savings measures we have taken."

OYAK PAID 1,34 PERCENT OF TOTAL TAXES PAID IN TURKEY: "In 2018, we are continuing with our efforts by attaching a great importance to offer sustainable and high interests to our members by taking quick decisions at the right time. While utilizing the savings of our members with an accurate approach, we continue providing an increasing contribution to the Turkish economy with our leading organizations located in several regions and important sectors of Turkey. We are endeavoring for supporting our country's combat against current deficit, as well as the employment mobilization, and give our best to ensure OYAK's presence in the production fields that will reduce the foreign dependency. In addition to this, we have the justified pride of paying 7,2 billion TL tax in 2017, corresponding to 1,34% of all the taxes paid in Turkey."